You are here: Home / newsletter / History of the cabins at Little Garie, Era and Burning Palms

A recent Ramblers walk from Garie Beach to Otford included meeting a local from the Era shack community who gave the group an interesting history talk about the area.  Following is an exerpt from “Living Heritage” a publication of the RNP Coast Cabins Protection League – www.rnpshacks.info. 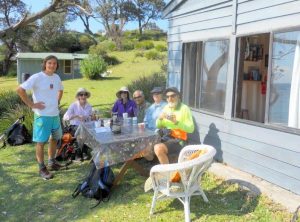 The Aboriginal people occupied this coastal land for thousands of years.  Their continuing cultural heritage is acknowledged.

1800s:  Land grants were given to pastoralists in the area, who farmed on the flat land at the top of the escarpment.

1910 to 1950s:  Shacks were built by farm workers with permission of the landowner and rent was paid. Many more were constructed during the Depression.

Mid 1940s:  Development was threatened with the expected sale of Era and Burning Palms land.  Shack owners formed a Protection League to buy the land.  They lobbied for the land to be resumed by NSW.

1949:  A delegation went to the Minister for Lands.

1953:  Land incorporated into Royal NP.  Shack owners were allowed to stay but no new shacks were to be built.

Until mid 1960s shacks were able to be bought and sold.

Fearing all shacks would be demolished, shack owners took their case for preservation to heritage bodies.

2005:  Licensing scheme by NPWS was rejected by shack owners.  A court case let to a mediated settlement with most shack owners having a licence for 20 years.  In addition NPWS was required to join the Protection League in nominating the cabin areas for State Heritage Register.

2012:  Approximately 140 shacks were listed on the NSW State Heritage Register.

First Aid Course and How to Treat Dog Bites