You are here: Home / newsletter / Men in Skirts

Gerry our trip instigator and planner had been trumpeting the fact that April was the best time of year to tackle this challenge, because it is the least windy time of year. But, then again, there are exceptions to the norm. By the time we set out on April 10, we were virtually frothing at the mouth in anticipation of our adventure! The first day, involved a long drive to Tooleybuck, a small town on the Murray. Incidentally, this community was an early teaching appointment for Denis Whitfield. The next day’s journey across Northern Victoria, along the Mallee Highway, was a shorter journey. There had been a lot of discussion about check points at border crossings. However it wasn’t until we got to the South Aussie border that there was a check and it was only for fruit. We arrived mid afternoon at Wellington hotel, our accommodation for that night. In order to get there we had a short ferry trip across the Murray river. Later that afternoon, we packed our kayaks, ready for an early start the following morning, Incidentally, we enjoyed a very tasty meal that night at the hotel.

DAY 1 :   Bright eyed and bushy tailed we got underway early the following morning, with the sun shining and a gentle breeze. By the time we had paddled about 7kms downriver, we started to enter the lake and began to realise just how vast the lake actually is.  As we continued to paddle south, keeping the lake’s eastern edge in sight, the northerly wind started to increase in strength. This made our first leg of 31 kms to Narrung Ferry, a relaxing day.  On reaching our destination, we set up camp at a very agreeable free camp site. Unfortunately we were given a reality check when very powerful northerly winds developed during the night.

DAY 2 : The wind continued to blow from the north at approx 40kms+, so kayaking was definitely off the menu. As our Commanding Officer, Gerry, might say, we were confined to barracks.  A couple of the guys tried their hand at fishing, but Tony was the only success, managing a carp. I’m sure the South Aust government is very appreciative of your efforts, Tony!  Frank, our Catering Officer, had been talking up the quality of carp, pointing out that they are widely eaten in Europe. Just to prove his point, Frank cooked it and several of us sampled it. I still haven’t made up my mind whether I feel grateful to Frank or not. Tony, our Entertainments Officer, took advantage of the gale force winds, with a masterly display of kite flying. Several of us also tried it and it was great fun. The fact that Tony had brought a kite might suggest that he had a better handle on likely weather conditions than more senior personnel. Later that evening, the Trivia Competition got underway and this certainly got the competitive juices flowing. Despite the intense pressure being applied by aggrieved groups, Tony stood his ground and adjudicated firmly and fairly

DAY 3 : Come morning the northerly wind was still blowing fiercely, so it was decided further progress towards  the Coorong was out of the question. Fortunately Judy was not too far away, so she was contacted. She generously agreed to drive to our campsite and then transport the drivers back to Wellington to pick up our cars from the Hotel car park. The cars were then taken to our camp at Narrung Ferry, gear was packed and we headed over to the northern side of the lake. We found a suitable free campsite at Stuarts Point and setup for the night. We had another round of trivia that night with the usual banter and protests about questions and answers. This behaviour was undoubtedly assisted by generous consumption of powerful concoctions!  After the Trivia, our resident DJ, Gerry, entertained us and anyone within a radius of at least 2 kms, with his extensive music collection.

DAY 4 : We set off early to paddle to Clayton Bay which was west of our camp. Unfortunately the wind was now a westerly, so it was fairly hard work. When we stopped for a break Graham very nearly stepped on a red belly black snake.  You have to make allowances for him, he spent a lot of time in New Zealand. They don’t have snakes over there. It appears the snake was none too pleased with us invading his patch and adopted an aggressive pose. Padre Ron, gave him a bit of hurry up with his paddle and he then took to the water and sought refuge under Gerry’s kayak. After encouragement from Gerry, he moved further away but remained in the water. We moved on and after 13.5 kms reached our destination, the little community of Clayton Bay. After lunch we started on the return trip. To begin we needed to sail across the wind which was now blowing very strongly (30 kms+). When we got far enough into the lake we were now able to head back to camp and take full advantage of the following wind. Needless to say the return trip was great fun and we probably completed it in about half the time it took us to get to Clayton Bay in the morning. That night we completed the final rounds of the Trivia and the team of Graham and the Padre were victorious, with Peter and Rod a close second. Thanks to Tony’s daughter, Jessica, for compiling the questions and creating the answer booklets. After a few more trips, I feel I would be well equipped to pass the nursing exam on the human anatomy (The body has 204 bones and the tongue has 9,000 taste buds, or is it the other way round?).

DAY 5: Rain during the night and dawn brought a cool and showery day. So our plan to drive to Goolwa (where the Murray meets the Southern Ocean) and do a short paddle in the Coorong was scrapped. However we did drive to Goolwa, crossed over the bridge to Hindmarsh Island and checked out the mouth of the Murray.

Although we were unable to achieve our circumnavigation, we all had a good time and enjoyed each other’s company. A big thank you to our Commanding Officer, Gerry for his planning and organisation.

I would like to conclude by simply stating that if this time of year is when wind conditions are calmest, I’d hate to be there when it gets seriously windy! 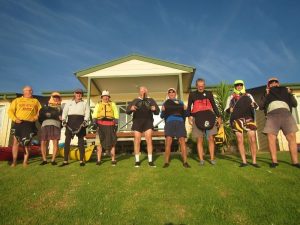