Thanks to Greg Smith for this article

The Otford Railway Tunnel between Otford and Stanwell Park, almost a mile in length, was constructed in 1888. It was on a grade of I in 40 throughout, rising from Stanwell Park, and had a very tight cross-section for its single track, while its lower end with curve at the portal scooped in any south or south-east wind from the sea. While the passenger with closed windows in an up train had an unpleasant journey and the guard used newspapers for stuffing up the door cracks in his van, the unfortunate enginemen underwent a shocking ordeal. On tender engines, both knelt on the footplate, coats over heads, to breathe the air coming from under the engine, the apron plate being raised for this purpose. Though the air was hot from passing through or round the ash pan, it was none the less welcome.

In the earlier years mineral and goods trains were mostly hauled double-headed by saddle tank engines of the “1” class. To keep the loads down, a third of the train was worked through the tunnel at a time, the remainder being left standing on the main line, until called for by the return of the engines from Otford. On these engines there was no apron to raise for air, so the enginemen would then ride on the steps to keep them below the smoke and steam exhaust. When, as was common, the engine lost its adhesion and slipped to a stand, the driver had to get on his feet to re-start, or back the train out for a breather, not a very safe proceeding in the days before Westinghouse brake became universal.

In 1891 an attempt was made to improve conditions by re-opening the original construction shaft of 7 ft. diameter, but with no appreciable result. The top of that shaft may be seen in the valley between Mt. Bulgo and Bald Hill. In 1908 a more serious attempt was made by installing a large ventilating plant at the upper (Otford) end, but results were not up to expectations, as the fan blew the air down against the heavily steaming locomotive, forcing the smoke into the cab and carriages under pressure, the conditions being further aggravated when the southerlies blew. Naturally there was a considerable amount of criticism from ventilation experts from the local mining fraternity, for the Departmental attitude was rather difficult to justify. Similar stupidity was shown on every public holiday when a train was sent empty to Stanwell Park, hauled by an “S” class tank-engine, to deal with the crowd of picnickers. The return trip loaded was a fiasco, for the train invariably stalled in the tunnel and had to be backed out and divided, these manoeuvres becoming a routine matter at holiday time but not exactly encouraging the travelling public to repeat the visit.

Standing instructions in the later years of the tunnel’s existence limited the passage of drivers to two “up” trips per day and prohibited double-heading during southerly weather, this latter restriction making for saturation of the Illawarra Line. The use of respirators in tunnels was unknown at the time. Railwaymen and passengers alike were delighted when the tunnel was superseded by the Stanwell Park Deviation of 1926. 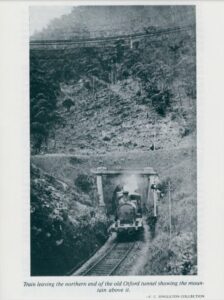