It is with deep regret that we announce the passing of Peter Witt on Tuesday, 21st July, 2020.His family, partner Karen, and friends were joined by club members of various denominations to farewell Peter and as requested by him, his ashes were scattered in the Shoalhaven River at Nowra.

Peter was a member of a number of clubs most of which involved some form of outdoor activity. Since moving to the Shoalhaven with Karen he became more and more involved with the Ramblers and led a large number of excellent activities.

He was a leader with his own style. He was decisive and direct and called it as he saw it – we all got to appreciate and understand that this was Peter.

On many of the river trips and bushwalks we did together, one could always count on getting a little extra adventure and challenge. When incidents occurred however, which happened frequently, Peter was able to deal with the situation. On the last Murray/ Mitta Mitta trip Peter was heavily involved along with club members in a tricky rescue and did so when he himself was not feeling at all well.

Peter also had a soft side, as we witnessed on some of the river trips. His relationship between “Bits“   and later “TW” (his dogs) was something to see.

We all think that a good man has left us much too early, however on future trips wherever they may lead us, our thoughts will drift back to Peter to remember the great times we all had together. 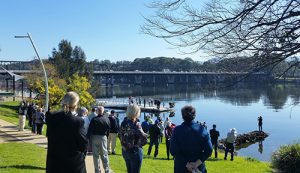